Santa Fe is the capital of New Mexico. At 7,198′, it is at a higher altitude than Albuquerque, and is the highest capital city in the US. Recent travel literature on Santa Fe had been pretty negative, with grumbles about the high concentration of retirees from all over that made the city a staid place for the young, and the authentic cultural experience that had since turned into a kitschy tourist destination. But was that true? We were going to find out for ourselves.
We headed straight to the well-known Santa Fe Plaza. Right on one end of the Plaza was the iconic Cathedral Basilica of St. Francis of Assisi. The other side of the plaza was the equally iconic Palace of the Governors where Native Americans sat displaying their wares by the sidewalk. Both these places made up the majority of photos that one could find on Santa Fe.

Coincidentally, it was also the day of the arts and crafts market. A large number of booths were set up in the Plaza, with artists selling everything from gigantic garden accessories to honey to jewelry. Having been around art fairs in the Midwest, where such fairs were on a much smaller scale with a much smaller variety of art, the Santa Fe art market was really a breath of fresh air for us. We wandered around, sampling New Mexico honey from a friendly person who called everyone “Amigo,” we played with large metal animal-like statues, and browsed the various potteries and paintings on display.

Around the plaza, there were shops selling the usual tourist trinkets, but there were also a few intriguing stores that had fossils, custom handmade hats, products completely made of recycled cork, and countless jewelry stores. 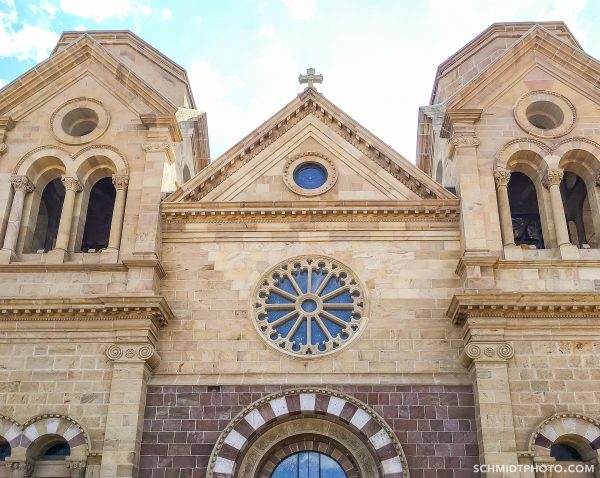 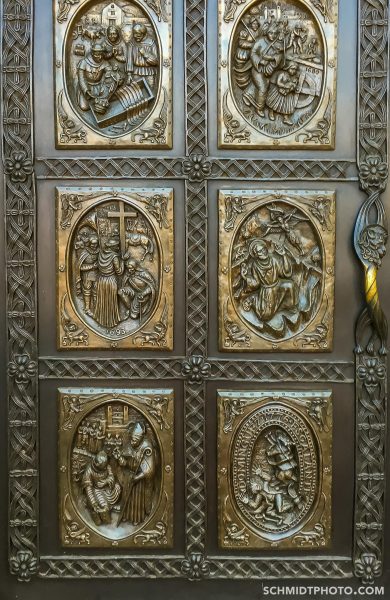 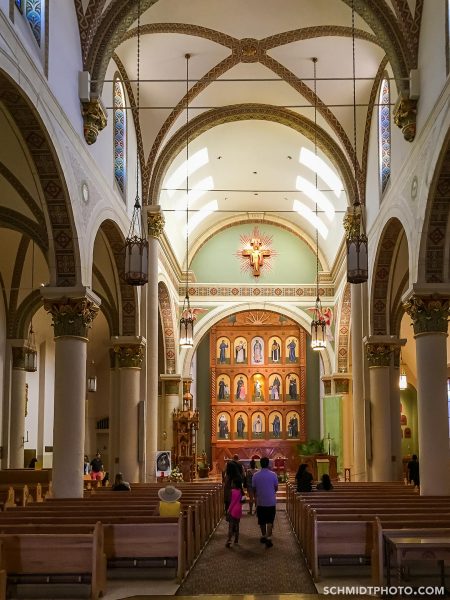 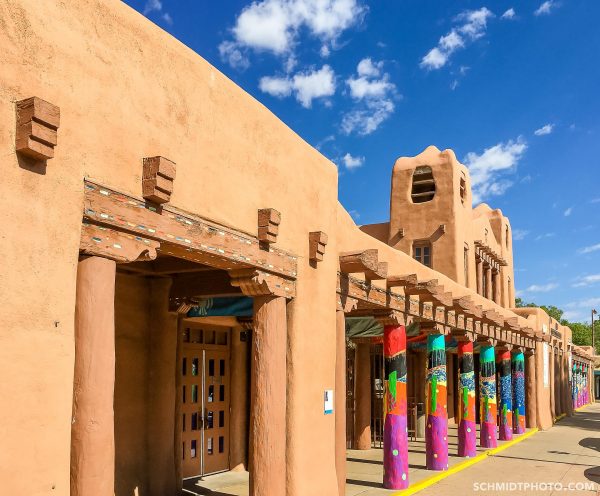 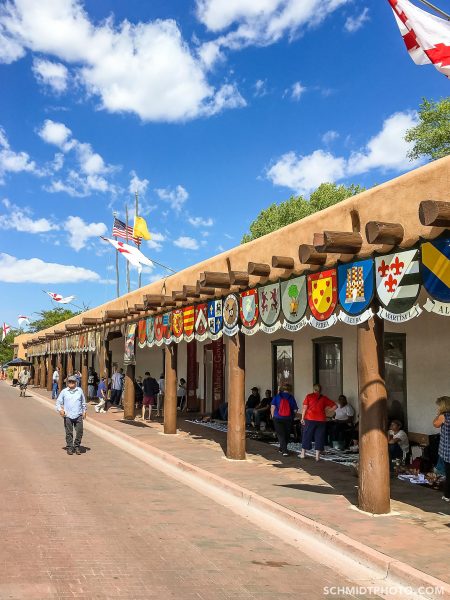 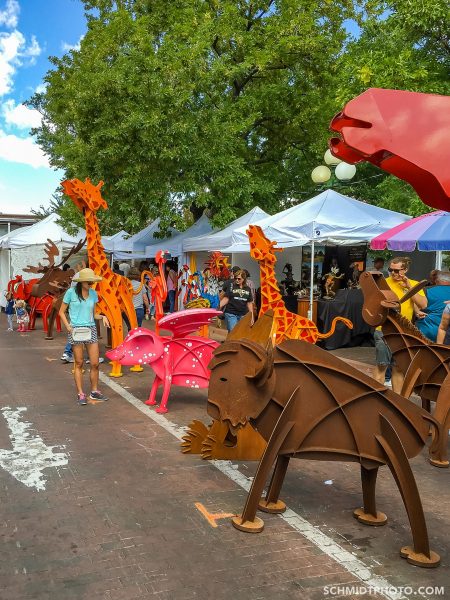 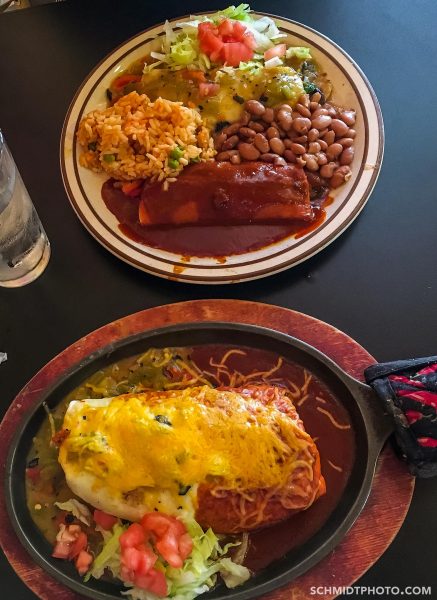 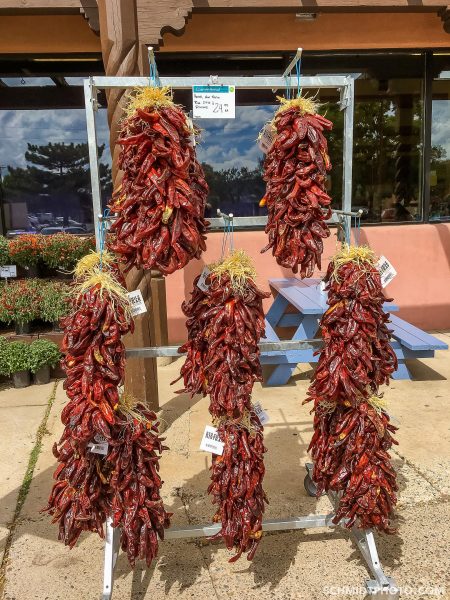 Heading east of the plaza, we ventured down Canyon Road, known for the fine art galleries that lined the streets. The galleries were situated in historical pueblo homes that had been retrofitted with museum-like white walls, crisp white light, and plenty of wall space for paintings. Some of the outdoor spaces displayed massive sculptures and statues. 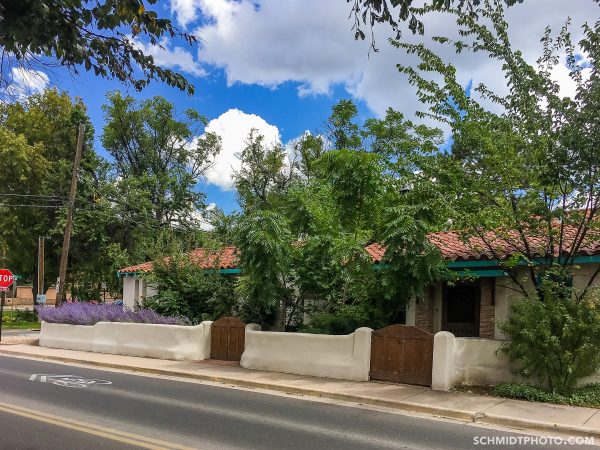 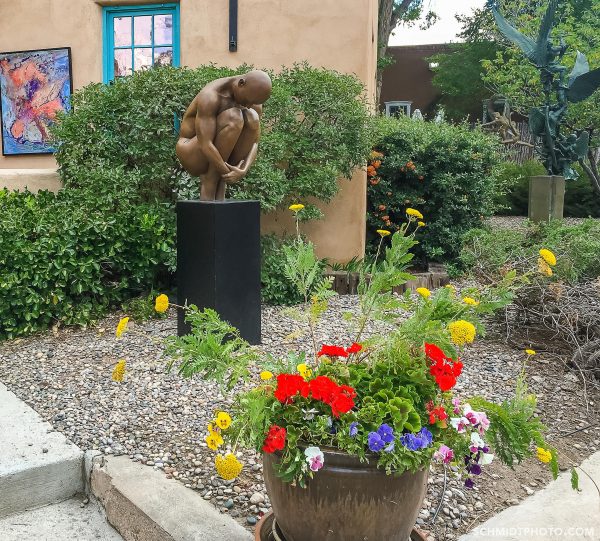 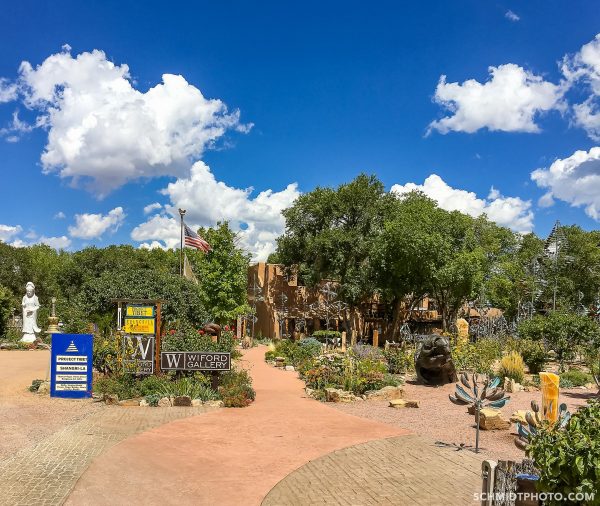 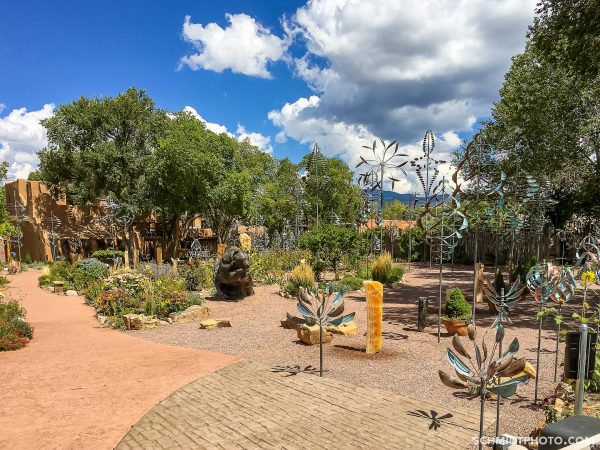 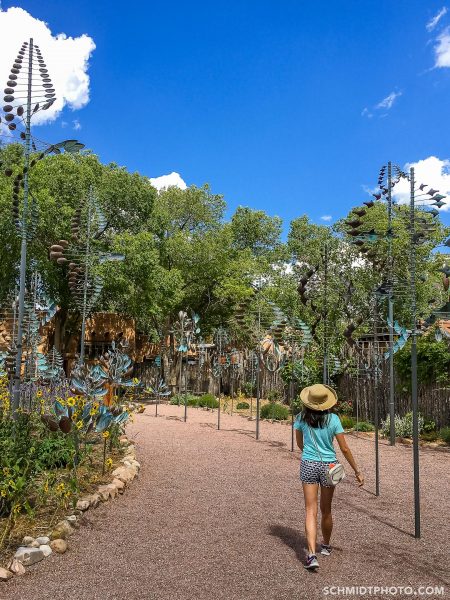 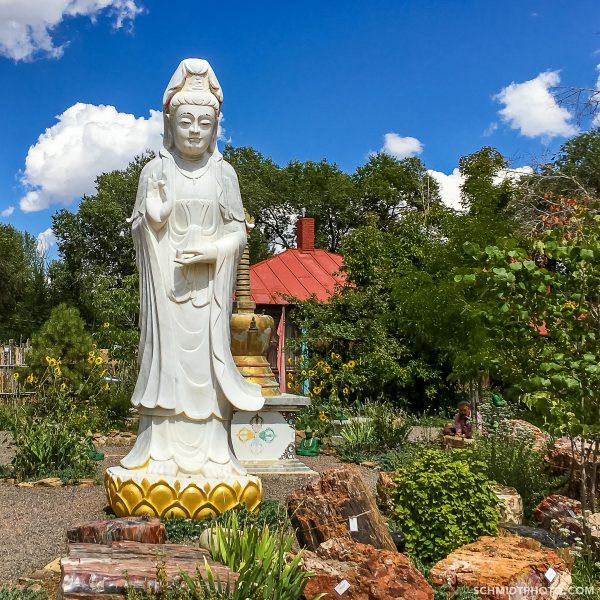 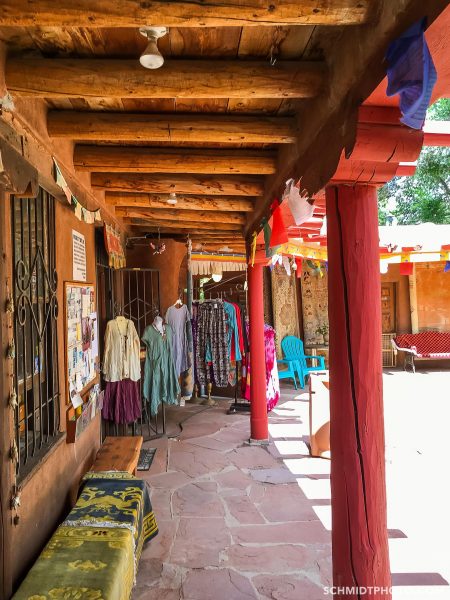 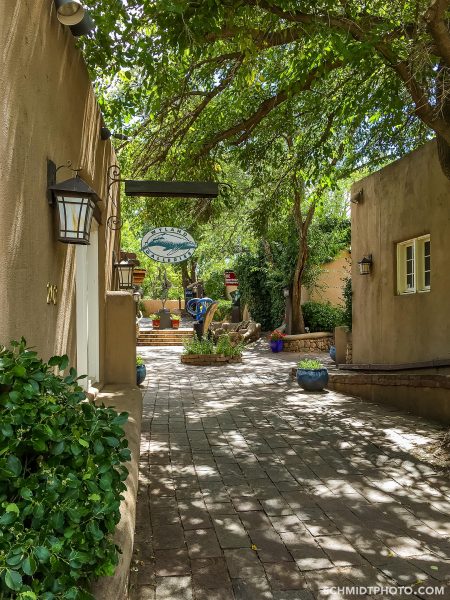 There was never a day without some form of hiking on our trip. We headed to Hyde Memorial State Park, 15 minutes drive from the Plaza, and jumped on the Circle Trail. It was a short three-mile hike that looped back to where we started, but it was not a hike for the unprepared. The hike warmly welcomed us with an extremely steep 1000’ increase in altitude in a short one mile, which meant we were walking upwards at what felt like a 45 degree incline. Huffing and puffing, we took many short breaks throughout the first mile. Wherever we stopped, we got peeks of Santa Fe through the trees. We breathed a sigh of relief as the hill finally flattened out at the peak, and found a bench to catch our breaths. As we gazed at the endless rolling hills ahead of us, it dawned on us that we would be faced with a steep 1000’ decline in altitude in a short one mile to get back to where we started. Sure enough, the easy flattened path ended, and began a precipitous descent back. We were gripping onto tree branches, trying to stop ourselves from slipping and landing on our behinds as little rocks rolled beneath our feet. The hike was certainly an amazingly intense workout for such a short distance.

We didn’t think Santa Fe was that kitschy of a tourist destination. Yes, there were many retirees, and the population seemed to be on the older end. But for us, the different landscape and culture was intriguing and eye opening. Perhaps it was mostly because we were not exposed to the Southwestern culture, but we certainly had a great time learning about it. 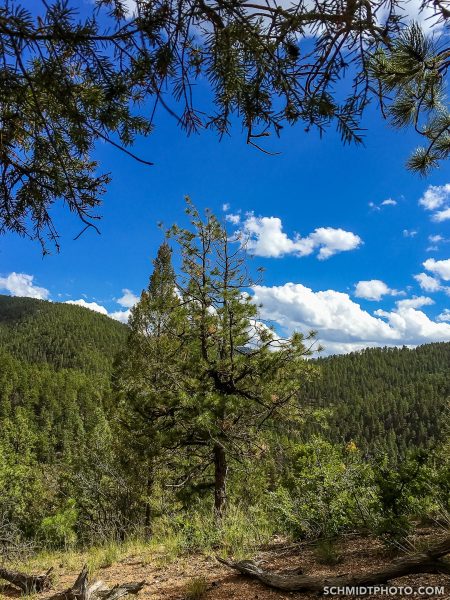 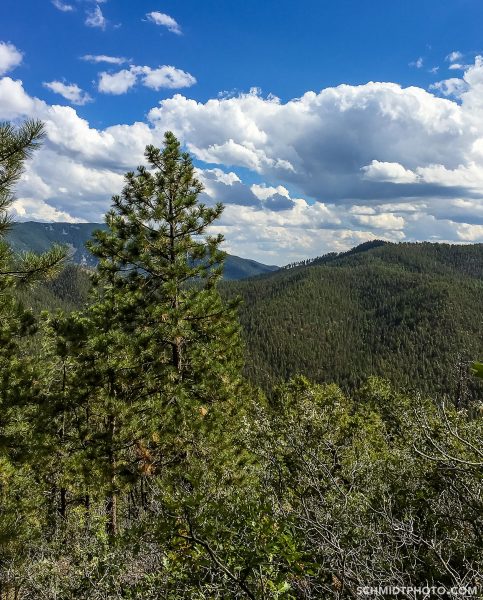 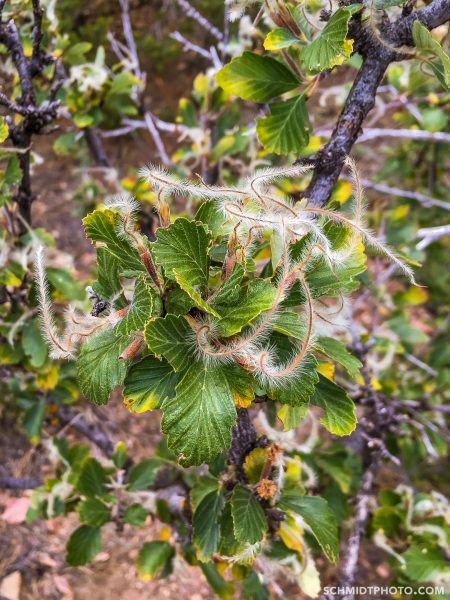 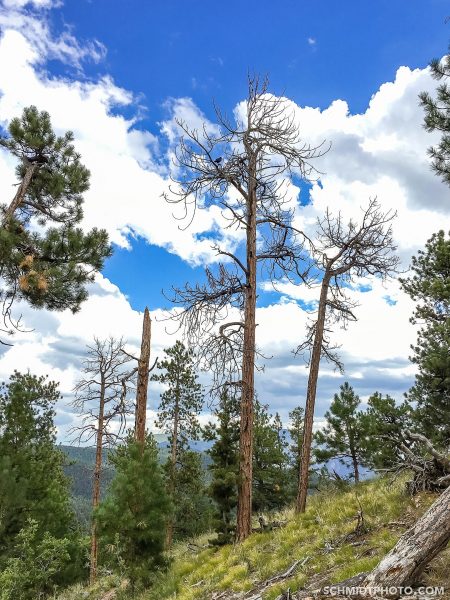 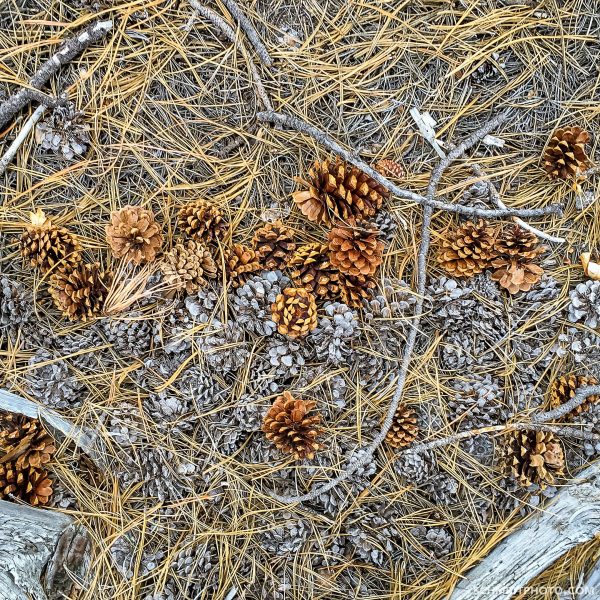 On our last day in Santa Fe, excitement seemed to have left the city. Everywhere was quiet. The Plaza, where the Art and Craft market was the day before, was empty and no one was around. Overnight, Santa Fe had turned into an ordinary small town.
We headed back to Albuquerque, and similarly, the city had also become lifeless. We stopped by the Old Town neighborhood, and found the area to be deserted, except for people working in the stores. We then ventured to a popular local coffee shop, Deep Space Coffee, to kill some time before our flight. The coffee shop was situated in a street of characterless buildings with architecture and atmosphere that were reminiscent of Midwestern small towns, where time and world had left the towns behind. We struck up a conversation with a local, and he inadvertently gave us a little insight into the New Mexico culture by saying, “It is so cheap to live here, so we travel to fun places with the money we saved.”

The comment, along with the lifelessness of the cities, highlighted a sliver of reality of everyday life in New Mexico – the poverty, the decrepitude and the lack of magic from the locals’ perspectives. New Mexico was after all, one of the poorest states in the US. The fleeting scenes of Native American reservations and pueblos, some with kilns in the yards most likely for making potteries that tourists happily lugged home. But mostly, the barrenness of the homes that hinted at possible struggles the dwellers were facing. Not to forget, the Native Americans who sat near the plazas of Santa Fe and Albuquerque and even Bandelier National Monument, silently watching tourists examining their wares. What was happening in their lives?

Despite all that, New Mexico was an intensely beautiful place. We had wonderful memories of the hikes, the breathtaking landscape and of the many friendly people we came across. We could not bear to say bye to New Mexico, constantly staring out of the plane windows to look at the mountains and desert. The view on the flight back was also ruggedly picturesque. Harsh, dry mountains, some dusted with snow, and remote small towns with barely any visible road that led to them. Slowly, the brown landscape gave way to farmlands, and then to bigger towns, and finally Chicago appeared.

Back at home, our eyes were glowing, and our minds rejuvenated. We couldn’t help but talk about the trip with such enthusiasm that perhaps, we could inspire someone else to take a spur of the moment trip to this enchanted high desert in the mountains.